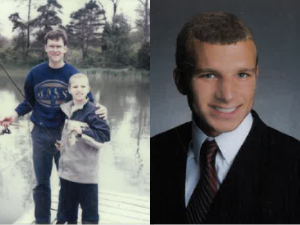 Big Brother Pat and Little Brother Michael were matched when Michael was 9 years old. Their match ended when Michael graduated high school.  Michael is now 31, and he and Pat still keep in touch occasionally.  He lives out of state now so their visits are less frequent, however Pat’s positive influence in Michael’s life continues to this day. We reached into our files from a few years back and found this testimonial from Michael just after he earned his Master’s degree at the University of Cincinnati:

“I was first matched with my Big Brother, Pat, when I was 7 years old. It was a result of my father passing and my mother wanted to make sure that I had a father figure in my life. I remember being very apprehensive about the whole situation in the very beginning. As you can imagine, I was going through a whirlwind of emotions because of my father’s death. Depression is something that I had dealt with for the first few years while I was matched with Pat. I was lucky, though, to have someone so supportive through these hard years. If it wasn’t for Pat, I am not sure if I would have made it through those years in one piece.

“After the grieving period, I was able to start to appreciate Pat. He was a prominent figure in the Hamilton area, and he was an alumnus of Badin High School, which is where I ended up attending. I started to look up to him and how he seemed to have his life together. My mother was hit hard by my father’s death and has never recovered to this day so Pat became a huge support system in my life. He taught me how to talk to girls and how to set goals and achieve them. He took me fishing, taught me how to change the oil in a car, introduced me to a plethora of people in the Hamilton community, and taught me how to stress less. Most importantly, he taught me to pray. He is and always will be someone whom I try to emulate.

“He was also a support system for my mother. Since Pat was a priest, he was no stranger to helping those who are grieving, so he would often times reach out to my mother to make sure she was okay. It was during these moments when I started to realize that Pat was not just another Big, but he was something more and I was lucky to have been matched with him.

“During my high school years, Pat moved first to Sydney and then Botkins, Ohio.  As a result, I saw him less frequently. I was busy with high school and everything that comes with that, so I did not mind it. Instead of seeing him every week, I would see him every two or three weeks. When I turned 18 years old, our match officially ended, but we were still very good friends and I would get dinner with him from time to time in Centerville, which is halfway between Cincinnati and Botkins.

“Through my years in college I really started to find myself and what I was meant for in life. I would call Pat occasionally. I knew that he would always be there for me if I needed someone to talk to. I have obtained a B.A. in Communication and Psychology and, just this month, an M.A. in Communication at the University of Cincinnati. I plan on serving as a team leader for AmeriCorps NCCC-FEMA Corps starting in July.” [Note: Michael did serve in AmeriCorps, after which he worked in the hotel industry. Today, he runs a successful online business selling merchandise featuring his two cats, Toothless and Fury, which you can follow on Instagram].

“I often think about Pat and the impact that he has had on my life. We still get together about once a year for dinner and to catch up. I would definitely not be the man I am today if it wasn’t for him. I guess it has always been a goal of mine to be able to pay him back for everything he has done for me, and that has pushed me to succeed and to never give up.

“I am confident in saying that my family will forever and always consider Pat a part of our family and if he ever needed something from me, then I would be there for him. I hope to one day be able to be a Big for someone like Pat was for me. I want to personally thank you and the Big Brothers Big Sisters organization for providing me with such a great mentor and friend!“

Be a Big like Pat was for Michael. It takes just a little time, but has a big impact. Click here to apply today.